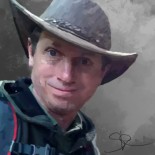 A life of courage, joy and independence.

When I discovered this road I was startled at how soon it became completely consumed by the surrounding forest. Where the road disappears into the woods in this photo is where the hike became very difficult. Landslides, small waterfalls anddense foliage almost turned me back several times. Finally though, I made it through the worst of it and emerged into a dense, dark cedar forest where I could walk on the road with little difficulty. Nevertheless, the gloomy and silent nature of the woods here (not even bird sound could be heard) was a bit unsettling. The road split at one point and I spent the early afternoon exploring first the upper and then the lower branch. The upper route led through a series of abandoned green tea farms with hand-laid stone terraces and numerous dilapidated wooden buildings. There was even a small abandoned Shinto shrine at the very end where I elected to have my lunch with the forgotten mountain deity. The lower road led to another farm, a very sturdy bridge to nowhere and what appeared to be an abandoned farm trail. The trail was utterly impassable due to a huge, scary tangled deadfall which made me think of Steven King’s novel Pet Sematary. Before departing this valley I made a one hour plunge off-trail and into the deep wild where I found myself at the top of a very high waterfall. The water was low here though I could hear the roar of a much larger waterfall coming from the next valley over. I tried to reach that canyon but was turned back by a knife-edge saddleback which set my vertigo to whir. This abandoned farm road hides a true valley of lost wonders for anyone with enough curiosity or courage to push through the natural barriers at the entrance. 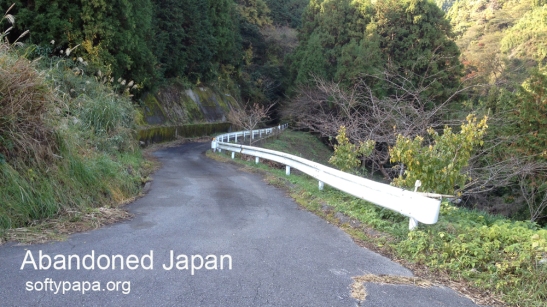 Welcome to the Abandoned Japan blog. My name is Kurt Bell and I am delighted that you have taken some time to share a little of Japan with me. I’m available on Facebook and Google+ if you have questions or just want to chat and say hi. I can also be found at the JVLOG forum with other Japan-related content creators. All links are listed below. I look forward to meeting you on-line. Have a great day!

You can also reach me via email at the following address: softypapa@gmail.com

The Path of Wildness is an answer and response to a prescribed way of life which may leave some individuals with a sense that their living is little more than a series of pre-determined, step-like episodes between birth and death. The stages of living between these events: childhood, adolescence, adulthood, parenthood and senior are themselves natural and in accord with the needs of the species and most individuals. Many find their satisfaction in living this course and to these individuals I have little or nothing to say. Others though long for something more; something innate, genetic and seemingly calling. Adventure and change can give a degree of satisfaction and relief yet even these may seem too tame. To those who feel drawn to something beyond the entertainment and stimulation of senses I offer a walk along The Path of Wildness. Don’t bother penciling the event in your schedule, preparing a pack with goodies and supplies or even inviting a friend along, for this experience is along the course of your first inclination and you must surely always go alone.

The Path of Wildness Resources